Welcome to the Office of The Political Ombudsman’s Website 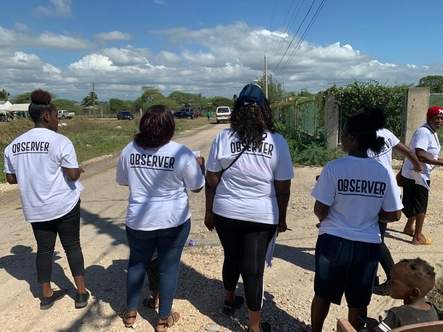 CLARENDON, Jamaica — Co-chairs of the Election Centre, Director of Elections Glasspole Brown and Political Ombudsman Donna Parchment Brown, are condemning the actions of unauthorised individuals clad in white shirts with the word ‘OBSERVER’ printed on the back, seen at voting locations interfering with potential voters in the Clarendon South Eastern constituency where a by-election is now underway.

The Jamaica Labour Party candidate Pearnel Charles Jr is facing off with independent candidate Dereck Lambert for the right to replace Rudyard Spencer as the Member of Parliament for Clarendon South Eastern.

The Election Centre said only Citizens Action for Free and Fair Elections has been accredited observer status by the Electoral Commission of Jamaica.

The co-chairs further cautioned all individuals from engaging in this misleading conduct.

Just over 41,000 electors are eligible to vote in today’s by-election, with the polls scheduled to close at 5:00 pm.

The Electoral Office of Jamaica has said final results should be available by 7:30 pm.